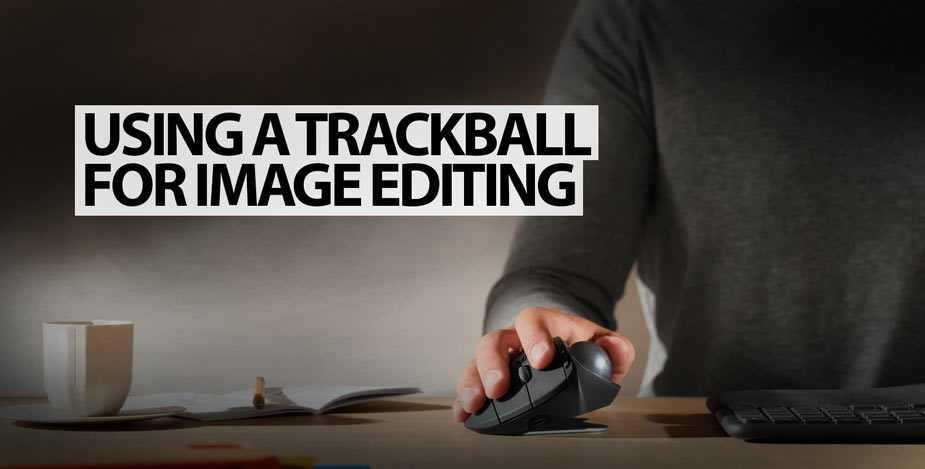 You thought we left the roller-ball mouse behind in the early 2000s when optical mice started becoming popular, but then, there’s this article that you’re reading about using a trackball to edit your images. Surely, you must have traveled back in time, right? Not really. I’m with you in 2022. So, am I slightly crazy? I hope not. Read on, and let me know if you think I am in the comments.

As a photographer, I spend a lot of time using the mouse, or Wacom tablet as my main input device. I may be using the pointer to move a slider, create a clipping path for a product, or to dodge and burn an image. This involves many tightly controlled, and small movements with my input device of choice.

Now, I use both a Wacom Tablet, as well as a couple of mice such as the Logitech G402 wired gaming mouse, and the Logitech MX Master 3 wireless mouse. However, I sometimes prefer to use a mouse over the Wacom, and recently I’d been feeling like I’d prefer something that’s similar to a mouse, but that puts less strain on my hand when doing certain routine tasks.

Not everyone may have a Wacom to switch to for ergonomic comfort, so let’s explore what happens when you’re using a mouse to edit images… something that calls for minute, super-accurate movements of the pointer.

What Happens When You Use a Mouse for Extended Periods of Time?

When I use a mouse for extended periods of time, I tend to do the following.

All of this contributes to my risk of developing carpal tunnel syndrome – a condition where the body defends itself from constant strain by adapting itself to it. Unfortunately, this adaptation puts excessive strain on the nerves of your hand, and this results in persistent pain, swelling, and a very poor work comfort.

Carpal Tunnel Syndrome could lead to debilitating pain and cause you to need surgery, or to take time away from work. I don’t want to do either, so I chose to try something else instead.

Using a Trackball Instead of a Mouse

Enter, the Logitech Ergo M575 wireless trackball (or any other trackball for that matter), this is a device that does not move. Instead, you control the cursor by rolling the ball that sits under your thumb. The left-click and right-click buttons, as well as the scroll wheel, remain the same.

You can now place your hand in a comfortable position, allowing for the natural curvature of your arm. Since you’re not moving the device, you’re less likely to rest your wrist on the surface of your table, and to use it as a pivot point.

One of the nicest things that I could do is place the trackball anywhere (on my lap, for example), and still get the same level of accuracy, no matter the orientation. My arm and elbow are also more relaxed as a result.

An unfortunate shortfall is that because of the ergonomic shape, and the nature of the device itself, it is completely unusable by left-handed people (an exception is the Logitech Trackman Marble).

Is a Trackball Usable for a Photographer or Graphic Artist?

All these ergnomoic benefits are nice to hear about and may work well for a user who uses Word, or some other office application… applications that may not require frequent and precise cursor positioning and movement. But what about using a trackball for image editing? How does it work with software like Photoshop, Lightroom, Capture One, or Affinity Photo? Let’s try it out!

Getting Accustomed To Using a Trackball Instead of a Mouse

My initial reaction to using a trackball was “This is not for me” when the mouse cursor suddenly jumped as I turned the nearly two-inch ball with my thumb! I was taken back to the days of desktop mice that had a grey ball that one would periodically remove and clean with a cloth. Thankfully this isn’t quite the same.

I quickly got used to using the trackball, and as I used it, the movement of the pointer became easier, more accurate, and more sure. I wouldn’t say that the movement is like second nature to me as yet, but it’s getting closer to that.

Does the Ball Get Dirty and Are There Still Two Rollers That Need To Be Cleaned?

No, this wireless trackball is optical, and as a result, the surface of the ball needs to show movement somehow. Logitech does this by making this glossy, smooth ball, finely speckled. The ball moves smoothly and reasonably accurately under your thumb, and there is no give even when you press it.

Thankfully, because it does not need to have a textured surface, it doesn’t pick up much dirt. Even if it does get a little oil from your skin, the precision of the tracking is not affected. The movement is smooth, and I didn’t encounter any more jerkiness once I’d started using it a bit.

Image editing tools are definitely a challenge when first starting to use a trackball. But usage makes your body understand what it’s doing, and pretty quickly you end up forgetting that you’re no longer using a mouse or Wacom tablet… Until you need real accuracy.

I suspect that this is because you’re using two fingers – one to move, and one to click. In contrast, you’re using one finger to click and your hand to move the pointer.

Here are my thoughts on using the Logitech Ergo M575 with Photoshop, Lightroom, Capture One Pro, and Affinity Photo while using a trackball.

Making selections with the rectangular marquee tool isn’t all that easy at first, but with a little use, I quickly got used to how it works. In fact, I think I prefer it at the moment. Using text fields or sliders is as easy as, or sometimes easier than using a mouse, because the horizontal drag is actually easier. Using tools like brushes, or dodge and burn is still a bit unwieldy, and awkward. I don’t recommend it for painting, clone stamping, or any retouching.

In the end, using a trackball is probably feasible for some who use Photoshop, but certainly not for the power user. I would extend this recommendation to power users of any image editor.

Using the trackball in Lightroom classic was a little easier, and there were relatively fewer tasks that were challenging even when color correcting images from a professional photoshoot. The most challenging tasks are related to creating masks. Nothing will really outdo a Wacom tablet in that department, so it came as no surprise.

I’d say that most users can (with a little time and getting-used-to) use a trackball successfully and relatively efficiently in Lightroom Classic, and by extension Lightroom CC too.

One would think that the result of this trial would be similar to that of Lightroom because they’re similarly focused tools – but no that is not the case.

Unfortunately, the panels in Capture One have elements that are somewhat smaller than those in Adobe Lightroom, and as a result, I can’t really recommend using a trackball such as the Logitech Ergo M575, when I sometimes have trouble clicking on the right interface elements even with a comparatively accurate mouse.

My suggestion or Capture One Users: Don’t use a trackball with Capture One.

What Is a Trackball Good For?

Using the wireless trackball has actually brought quite a bit of relief to my wrist, and I definitely recommend having one by your side in addition to your mouse (yes, you can use multiple pointing devices connected at the same time).

I use it mostly when doing administrative tasks, for email, and even while using Photoshop or Lightroom for some routine tasks. However, for more intense design, or where I need to have a more intuitive and accurate input device, I fall back to using a good mouse. That’s best left for another article though!

If you’ve never used a trackball, and suffer from the strain of using a mouse for long hours, I definitely recommend using one… even if for only part of your work. I think you will find some relief.

If you are a photographer or graphic designer who uses a trackball for their precise work, please leave a comment below to let us know which device you use, and how you use it. It will help us all.

Devices Mentioned in This Article:

Note: This article is not sponsored by any third party. I just happen to prefer Logitech devices and use them for my day to day work. If you have any suggestions for other input devices, I’ll be happy to hear them.